There are many ways to go about crafting a book–or screenplay–and there are many teachers/authors/experts whose wont is to force the “right” method onto aspiring writers. Many will champion outlining (I’d rather eat glass). Some will tell you to spend time writing character biographies (I’d rather sit jury duty). Others say write a crap draft of the whole thing, then chuck it and start over with a brand new re-write (I’d rather get licensed in real estate).

There is no “right” way to write, just as there is no wrong. What a writer has to do is find their own method and then–this is the hard part–trust it.

I suppose my modus operandi may be different, or perhaps those of us who write like this are a bit less vocal about it. You see, it’s all in my head. That’s where the story gestates until it’s ready to be put onto the page. No outline. No character bios, at least none that are written down. The story and its people live in a corner of my brain, percolating. They stew when I’m talking to you, while out having dinner, at my day job slaying dragons, while I’m cooking, buying groceries, binge-watching Netflix, lying in Savasana, walking to my car or writing this post.

The story never stops churning and growing and developing…if you leave it alone and let it. That’s where the trust part comes in.

By the time I sit down to write, the story’s been clamoring for weeks (months?) to be let out onto the page. It’s usually a great rush getting it out. There’s nothing like that flow when the story is flooding the page, your fingers barely able to keep up. Fighting sleep to get one more paragraph done. Waking early to do more. Tapping into that creative vein is bliss. It’s why writers write.

This time, with Novel Three, I’ve been wrestling with Chapters 1 and 2 longer than I have with any of my other books. They’ve become alligators, antagonizing me and threatening the progress I hoped to be making. I expect the first three chapters to be tricky. They have to be because they must be right. They are the foundation of the book and you want them to be solid. Three chapters are about as far as any reader will give you before losing faith if your story hasn’t delivered by then (and the readers who’ll give you that long are truly generous souls). Those first chapters are where the seedlings of secrets are sown, where the payoffs begin and the world takes shape. When you do those chapters right, the rest of the book comes to life with relative ease.

Recently, I stopped alligator wrestling and trashed those two chapters. Sometimes, that’s the best way to move forward, even if it is painful. Taking a few steps back may lead to progress, but it still feels like defeat. (As you may know, I never really throw anything away. I keep the draft or have a doc set aside for cuts and edits. That’s the one thing I will recommend to all writers: keep your cuts. You’ll be able to make hard choices easier if you know they aren’t gone for good.)

Since I made that purge, I’m feeling more connected to the story. But dumping those chapters wasn’t so much my decision as that of the characters. Yes, I know that sounds nutty, but writers will understand. At a certain point, the people you create take over and start steering the ship. A good writer will step aside and let them. And maybe that’s what I was failing to do.

The characters have been growing stronger, their storylines taking root, subplots blossomed and all of that shifted the tale a little, giving it new and unexpected depth. That’s another exciting thing these made-up people will do: they will surprise you. Maybe they’re able to do that because they aren’t reigned-in by an outline. Their lives aren’t carved out before the story starts. They get to have a say in what unfolds because they aren’t bound by my expectations of who they are and what they will do. 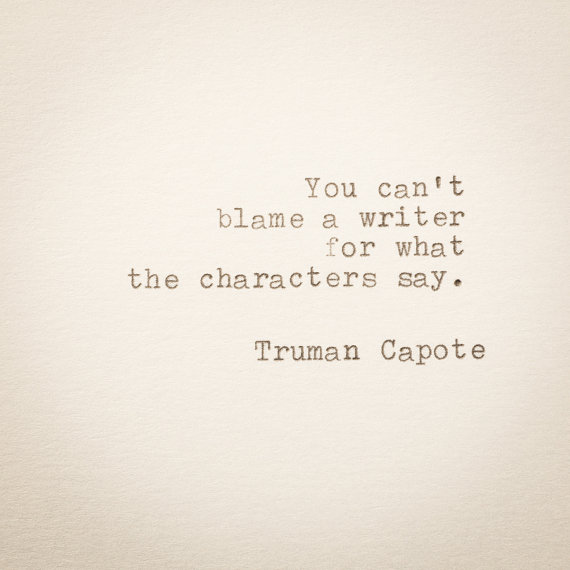 That’s not to say the story isn’t mapped out. It is, quite clearly. The ending is even set in stone. You can’t sit down to write without having that knowledge or you will be constructing chaos. But there is a dance between the creator and the created in which you have to let them lead from time to time. They know the rules and the boundaries of their world, and you have to trust them with that. It’s not easy but it is part of becoming the writer you desire to be: one who trusts themselves and their process.

Good writing happens when you stop alligator wrestling and give up control. I finally got out of the way and let the characters have their say. I’ve come to learn how wise they can be, and how easy life is when you loosen your grip. I’m back in love with the story and the people telling it. And it’s a nice place to be.

This site uses Akismet to reduce spam. Learn how your comment data is processed.